Does Trumps Decision Help or Hinder the Peace Process? 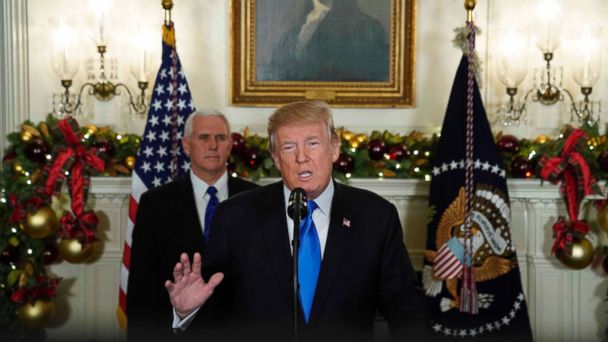 In a move that places domestic politics over decades of international and US precidenet, Predisdent Trump today announced that the US would recognize Jerulaem as Israel’s Capitol.

“Over the past seven decades, the Israeli people have built a country where Jews, Muslims, Christians, and people of all faiths are free to live and worship according to their conscience and beliefs.”Until the new embassy in Jerusalem opens, current law requires the president to sign a waiver that keeps the embassy in Tel Aviv operable. The new embassy “will be a magnificent tribute to peace,” he added.Secretary of State Rex Tillerson said in a statement following the president’s speech that “the State Department will immediately begin the process to implement” the decision to move the embassy.  read more at abc7chicago.com

While the step has been anticipated for days, it was not well received outside of Israel itself.

Despite urgent appeals from Arab and European leaders and the risk of anti-American protests and violence, Trump declared it was time for a new approach to Mideast peace after decades of failure. Calling Jerusalem Israel’s capital, he argued, was merely recognizing the obvious.

Ahead of Trump’s speech, a wide array of world leaders warned that his declaration could severely damage Arab-Israeli peace prospects in a region wracked by instability. They said recognizing Israel’s claims to the city, however caveated, would infuriate Muslims and potentially spark protests and violence that might further fray American alliances.

In Israel, Prime Minister Benjamin Netanyahu said his nation was “profoundly grateful” and Trump’s announcement was an “important step toward peace.” However, Palestinian President Mahmoud Abbas said Wednesday that the U.S. shift “is a declaration of withdrawal from the role it has played in the peace process.”   read more at chicagotribune.com

The Pope did not see the move as a wise one, and had urged President Trump to maintaint the status quo.

In an appeal at the end of his weekly general audience, Francis called for all to honor United Nations resolutions on the city, which is sacred to Jews, Christians and Muslims.

“I make a heartfelt appeal so that all commit themselves to respecting the status quo of the city, in conformity with the pertinent resolutions of the United Nations,” he said.

The Vatican backs a two-state solution to the Palestinian-Israeli conflict, with both sides agreeing on the status of Jerusalem as part of the peace process.

The World takes notice, New Zealand is following Trumps campaign follow through regarding not only the cancellation of TPP of which New Zealand was an active partner, but also the efforts on Trumps part to dominate and dictate to the US’s #2 trading partner, Mexico.

If he treats his neighbors like that, what can we hope for thousands of miles away?

US President Donald Trump is about to speak after Mexican President Enrique Pena Nieto informed the White House he has cancelled his trip to Washington.

The cancellation follows US President Donald Trump’s threat to force Mexico to pay for a border wall.

Trump said on Wednesday he would start building a US-Mexico border wall and vowed to make Mexico pay for it. Mexico opposes the wall and has repeatedly said it won’t pay for it.

Finance Secretary Jose Antonio Meade told Grupo Formula radio: “I think that, in general, diplomacy is not conducted via Twitter.”

“The Foreign Relations Secretary is involved up there, having meetings up there, and we’ll have to see what comes out of that, what report they send to the President and what conclusions they arrive at from all that,” said Meade.    read more: Via nzherald.co.nz

The future of diplomacy is likely to be challenged as non diplomats take charge in Trumps State Department. Do business men make good statesmen? The jury is out.  Ambassadors for Peace are nervously watching.