Daniel Barenboim is known the world over as a gifted pianist and conductor.   He was born in Buenos Aires to parents of Jewish and Russian lineage. He presently holds residence in Berlin and is a citizen of Palestine, Israel, and Argentina.

He debuted as an international solo pianist at the young age of ten. From that time on, he has given countless performances all across the world, including the United States, Europe, Asia, Australia, and South America. Leading orchestras all over the world request for him as a conductor. He is honorary-conductor-for-life of the Chicago Symphony Orchestra and the principal-conductor-for-life of the Staatskapelle Berlin. Presently, he works with Staatsoper Unter den Linden as general music director.  He is also with Milan’s Teatro alla Scala as maestro scaligero. 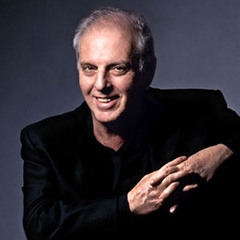 Daniel Barenboim, in collaboration with Edward Said, Palestinian writer and scholar-professor of Columbia University, put up the Edward West-Eastern Divan Orchestra in 1999, bringing together young and promising musicians from both Arab countries and Israel each summer. The orchestra seeks to promote peace and harmony between cultures through dialogue and the shared experience of making beautiful music together.  Daniel Barenboim has pushed for music education in territories in Palestine, including a youth orchestra, as well as music kindergarten.

Daniel Barenboim has been recognized world-wide for his accomplishments in music, as well as for his various projects to promote peace and tolerance through music. He and Said were given the Príncipe de Asturias Prize for their work for peace.  Daniel Barenboim has received many awards from internationally recognized and prestigious organizations. The Evangelische Akademie Tutzing has awarded him the Tolerance Prize. Frankfurt’s Korn and Gerstenmann Foundation has given him the Peace Prize.   He is also the recipient of the  Kulturpreis and Großes Verdienstkreuz mit Stern (Germany), the  Praemium Imperiale (Japan), and the Grand Officier dans l’Ordre national de la Légion d’Honneur (France).  He was awarded the Goethe Medal, as well as the Royal Philharmonic Society Gold Medal — a most prestigious honor in the world of classical music. He is also the recipient of the Buber-Rosenzweig-Medal, as well as the Moses Mendelssohn Medal. He was chosen to be the very first artist-performer to deliver the celebrated BBC Reith Lectures, which the BBC World Service put on air.

No one can dispute his musical authority.  Daniel Barenboim has also made his presence felt in his support for dialogue and cooperation among countries to bring about world peace.  He has been named one of the United Nation’s Messengers for Peace, with particular focus in promoting programmes for peace and tolerance, particularly amongst nations which are still grappling with issues of conflict, strife, and lack of social cohesion and peace.