Contrary to popular belief that princesses stay inside stone walled castles waiting for their prince, some princesses devote their time in catalyzing the development of the world into a much more sustainable place.

Meet Her Royal Highness Princess Haya, Princess of Jordan, an iconic figure in Equestrian, and an Ambassador of Peace.

Princess Haya has been successful in all walks of life, including sports. She was the first woman to represent Jordan in International Equestrian Competitions and the only woman to podium finish (Bronze) in the 1992 Pan-Arab Equestrian Games. 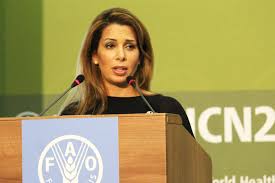 Princess Haya was elected president of the International Equestrian Federation in 2006 and made history after becoming the only reigning president to be challenged for a re-election, which she in fact succeded in; shooting down criticisms with a 75% win over her opponents. She is also the current President of the International Jordanian Athletes Cultural Association which funds the athletes with the support they need from sports clubs.

Pursuing her education far from home, Princess Haya attended Badminton School for Girls in Bristol, Bryanston in Dorset, and lastly in St. Hilda’s College, Oxford University in which she graduated with BA Honours Degree in Philosophy, Politics and Economics.

What stands out in her is her extensive support for Humanitarian work and her full commitment in being a messenger of peace. She established the Tikyet Um Ali (TUA), the first Arab Non Government Unit which targets the abolishment of extreme hunger and poverty by giving food  and employment assistance to families in need. In 2012, the TUA rolled out a campaign which aimed to multiplying its beneficiaries by up to four times thus, helping in eliminating extreme poverty and inching closer to the fulfilment of the MDGs by 2015.

She is a chair member of Dubai’s International Humanitarian City which provides the world’s biggest providers of aid both in emergency situations and long term development. The IHC is occupied by ten UN Agencies and over 40 NGO units which helped in supporting Syria through their civil unrest, and in East Africa during the extreme drought that hit the region.

From 2005-2007, she was a member of the World Food Programme in which she composed articles and editorials about health and nutrition. She was then appointed Messenger of Peace in 2007 by Secretary-General Ban Ky Moon.

Through her efforts in bringing world peace, we’re now a step closer to a better, more sustainable world.