Michael Douglas is renowned in the world of film and television as a multi-awarded actor and producer.  Born in 1944 to actor Kirk Douglas, he has distinguished himself by garnering numerous awards for his performances as an actor, as well as for the films he produced. He has received high praise from prestigious award-giving bodies including two Academy Awards, an Emmy Award, and four Golden Globe Awards which includes the esteemed Cecil B. De Mille Award.

His distinguished career in film and television has made him a household name.  It has also earned him more than $200 million.  He is considered among the biggest movie stars in the world – being exceedingly popular, as well as critically- acclaimed. 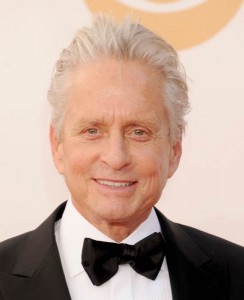 Michael Douglas is now lending his name and reputation to achieve important social-oriented goals. He is aware of what he calls his “enviable position.”  He uses his status to talk about entertainment and infuses his talks with messages of great social relevance.

He uses his prominence as an illustrious actor to talk about social issues.  He has a fierce and abiding commitment to the issue of disarmament. He advocates nuclear disarmament and putting a halt in the spread of nuclear weapons and weapon technology.  He is against the growing international trade in light weapons and small arms.  He is all for promoting cooperation among the nations in the peaceful use of nuclear energy.

He supports the Nuclear Age Peace Foundation.  He is a board member of the Nuclear Threat Initiative. He also sits on the board of Ploughshares Fund, a foundation which gives grants for anti-war projects.  He is one of the foremost supporters of gun control.

Michael Douglas has joined other individuals who have been named by the United Nations as their Messengers of Peace.  Carefully culled from a wide range of fields including sports, entertainment, science, literature, art and other fields,  these individuals have agreed to draw greater public attention to what the United Nations is doing.  They have pledged to use their passion, talent and time for raising awareness for the goals and objectives of the United Nations, helping raise the quality of life of billions of people all over the world.

As one of the United Nations’ Messengers of Peace, Michael Douglas is raising public awareness in the importance of disarmament to achieve lasting international peace and security.  He speaks publicly of the need to exercise greater control on the circulation and illegal possession of arms, particularly of light weapons and small arms.