Celebrated cellist Yo-Yo Ma is strengthening his efforts to work with the United Nations as one of its Messengers of Peace.  He is given the express task of reaching out to the youth and helping develop them as useful agents of change.  He has the responsibility of inspiring them to help address the many challenging social issues that face today’s society – particularly hunger, HIV/AIDS, and climate change.

Yo-Yo Ma was born in Paris, France to Chinese parents.  He received his education in the United States, graduating from the highly prestigious Harvard University and Juilliard School. A child prodigy who performed to outstanding praise and reviews at the age of five, he continues to cultivate an exceptional career as an acclaimed cellist, songwriter, and recording artist.  He has recorded more than ninety albums, with about a quarter of them receiving Grammy Awards.   His recordings consist of a wide range of eclectic music, including standard classics, Argentinean tangos, Brazilian music,  folk music, and traditional Chinese music pieces – all demonstrating his virtuosity and versatility. 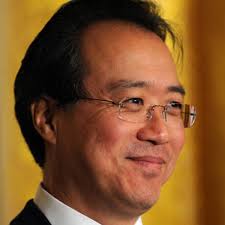 He is a firm believer that music is a strong and effective vehicle for drawing people together. He established the Silk Road in 1998 and serves as its director.  This organization dedicates itself to promoting the study of the traditions – intellectual, artistic, and cultural, of the ancient trade route along the Silken Road.  This includes a sweeping range of cultures surrounding the Mediterranean Sea all the way to the Pacific Ocean.  The project aims to connect the world by serving as an instrument to bring together audiences and musical artists all across the globe.  He collaborated with the World Health Organization, contributing music to produce a DVD to support the Stop TB Partnership Campaign.

With the Silk Road Ensemble, Yo-Yo Ma demonstrates that music should be approached with an open mind.  You can mix the traditional with the modern and break boundaries of period and ethnicity.  You can bring artists and audiences together, connecting neighbourhoods all across the world, with music that includes flamboyant surf guitar sounds, Egyptian rhythms, and modular musical pieces, among many — mixing the traditional with the contemporary.

Yo-Yo Ma has a versatile and complex career, demonstrating his never-ending search for new and unique ways to reach a wide audience, as well as his own personal thirst for artistic renewal, challenge and growth.  He is in a constant search for ways to stimulate his audiences regardless of where and how he performs.  He continues to enjoy collaborating and working with fellow artists for chamber music, to perform familiar, as well as new pieces for the cello, and to explore musical forms and cultures other than those belonging to the classical tradition of the West.

Yo-Yo Ma has received many awards and recognitions for his work.  In 2001, he was given the National Medal of Arts.  He was awarded the Presidential Medal of Freedom in 2011; in 2012, he received  the Polar Music Prize.