… as part of her larger national service platform, Hillary Clinton announced her plan to create a new National Service Reserve that will expand ways for young Americans to serve their communities and their country. The Reserve will provide a vehicle for the sense of civic ownership and responsibility that Clinton has felt throughout her life, bringing Americans from all backgrounds together in common cause to make a difference where they live. Anyone can sign up to join the Reserve, and national and local leaders can call upon Reserve members to take part in projects of all types — from natural disasters in places like Baton Rouge or emergency relief in places like Flint, MI to addressing the epidemic of addiction in places like New Hampshire. Clinton set a goal of enlisting 5 million Americans, with a special focus on people between the ages of 18 and 30, in the new Reserve.

Studies have shown that millennials are particularly interested in volunteerism and are contributing to their communities in a variety of ways, setting new expectations for social impact as individuals, employees, founders and consumers. Their impact is evident on existing programs, too: AmeriCorps is receiving five times more applications than it has spots to fill, and the Peace Corps has seen a 32% increase in applications compared to the previous year. Additionally, national service provides important job training opportunities especially for non-college youth, and helps Americans pay for college, repay student debt and build skills and that are attractive to employers. Read More 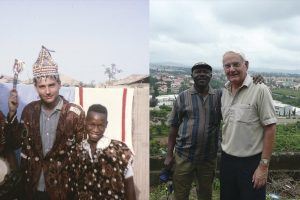 What is your favorite memory from your time in the Peace Corps?

From 1966 to 1968, I taught French at Ondo Boys’ High School, in the town of Ondo, in what was then Nigeria’s Western Region. There were many expatriates in Ondo at the time, mainly Brits and Israelis building the new roads from Ile‐Ife to Ondo and from Ondo to Ilorin, as well as Peace Corps and Voluntary Service Overseas (British) volunteers and a smattering of business people.

When the Eastern Region of Nigeria seceded in 1967 and the civil war broke out, many of the Ibos in Ondo fled in fear of reprisals. One of them had tended the town’s cold store, a general store with refrigerated and frozen items. He just locked it up and disappeared. This left the town, mainly its expatriates, without a ready source of the canned and other imported food items they liked that were not otherwise available in the local markets. Read More about Michael

Along with over 70 participants coming from the diplomatic community, NGO leaders, and Ambassadors of Peace, the UPF-DC and  The Washington Times Foundation successfuly celebrated the 2015 United Nations International Day of Families, June 4, Washington D.C, U.S.A

After a  sumptuous lunch, Mrs. Tomiko Duggan, UPF-DC Office’s Director of Public Affairs greeted the guests and elaborated details about the Internatioanl Day of the Families, she also gave people a glimpse of the organization’s view: “The Family as a pivotal unit in the society.” She then introduced the Master of the Ceremony who was also the Vice-President of the Washington Times Foundation and the event’s co-sponsor, Mr. Larry Moffit.

H.E. Dr. Neil Parsan is the Ambassador of Trinidad and Tobago to Mexico,and the U.S. He talked first and spoke about how Gender Equality helps in acheiving solace in the state and how the government should move in the same pace as the family. He tackled the matter of developing both the mother and father of the family in order to cater to broader needs of the family. 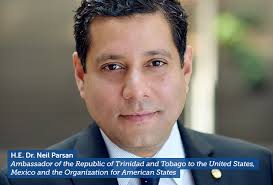 Next was H.E. Farhod Salim, ambassador of the Republic of Tajikistan to the United States. He spoke about the power of women in catalyzing the progress of the country and how the government should help in removing gender dicscrimination. Their government also took a number of effective ways in supporting the women in the society, he added,

Third was  Mrs. Phindile Ntshangase, wife of the Kingdom of Swaziland’s Ambassador to the U.S. She spoke about the monumental role a mother plays in the family. She also stated that the Laws that promote Discrimination of Women and the Children have no spot to fill in the family and the community. Her final words were for the Mothers, praising them for being the tree of wisdom in the family.

Mr. Ricardo de Sena UPF-USA’s secretary general was the last speaker. His speech was centered around the sacredness of marriage and how God as the center of marriage promotes lasting harmony. He also spoke of different words from varying religions that supports the family.

At the end of the event, H.E. Dr. Neil Parsan, H.E. Abednigo Ntshangase, Mrs. Hind Al Qatari, wife of the defense attaché of the Embassy of Qatar to the U.S. Mrs. Mie-Mie Joe Strickler, President of the Amer-Indo organization were appointed Ambassadors of Peace by Dr. Chang Shik Yang, President of the Washington Times Foundation.

For a take on a slap stick theatrical approach to peace in the world see this review.

We Salute Ambassadors for Peace, Charlize Theron and Stevie Wonder

We have begun our planned listing of Ambassadors for Peace by recognizing two United Nations recognized Messengers for Peace.

We will follow up with more as time goes on.

Our first is Stevie Wonder, followed by Charlize Theron. 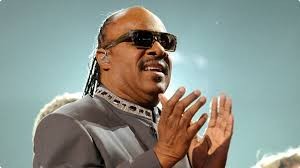 The United Nations has two major programs used to recognize people and to engage them in the work of promoting peace as well as UN endeavors in the world.  The Messengers of Peace are appointed by the Secretary General of the United Nations.  Messengers are selected from outstanding individuals in the public eye who have excelled not only excelled in their fields but have demonstrated a personal commitment to working toward peace in one manner or another.

This designation is considered to be the highest honor available to an individual and involves a two year period of active support through personal appearances and other activities in support of the United Nations programs. 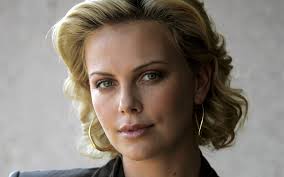 While we appreciate these celebrities, we also feel it is important to recognize every day people and businesses as well.

As time goes on, we will turn our attention to local champions, who may never gain mass publicity, but who work in their own simple ways to make the world a better place.

And today and from time to time, we will also share as we are able musical celebrations of Peace.

By way of introduction.

I am a Viet Nam Veteran, having served in the US Navy.

My DD 214 shows two tours and combat duty, but I had it easy compared to compatriots and friends.

Today I take solace in the phrase, “Some Gave All, All Gave Some.”

I had a great time while in the Navy, and hated every moment of it.

While overseas, I made a personal pledge that upon returning home I would work for Peace from the Grassroots up.

Over the course of my life, that has taken a variety of forms.

This is now a new venture. To celebrate peace and those who are working toward peace in the world.

My intent is to celebrate others. Those who have taken an active role as spokespersons and leaders on the international stage and also those who support those efforts locally here in the Upper Midwest.

We will seek sponsors from the local business community and hope to honor those who have taken a stand locally, but the overarching focus will be external. Identifying role models and spokespersons who are working to bring the message of peace to others.

I guess my name has pre-ordained this calling. It has not always been the easiest name to live up to. But here I am today, taking a stand for Peace.

In the coming weeks I will start by celebrating the official Ambassadors of Peace as designated by the United Nations.  From there only time will tell where this new venture will lead.